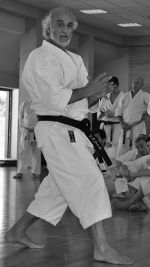 On 28 April 2013 after a heart atack Sensei Dan Stuparu – President of the Romanian Traditional Karate Federation and Member of the ITKF Technical Committee passed away.

Below is the official announcement from the Romanian Traditional Karate Federation:

„This morning, after a heart atack and two surgeries Sensei Dan Stuparu passed away. All that remains to be said after this terrible pain is the dates and place of the ceremonies:

– Wednesday the 1st of May at 12.00 Church Domnita Balasa – ceremony followed by the departure to the Bellu Orthodox Cemetery

The funeral at the Bellu Cemetery starts at 13.00

After the funeral everybody will go to the FESTIVITAS Hall at the Patriarchy Pallas.

May God rest his soul…”